Astronomers have found evidence of a substellar companion — a low-mass brown dwarf or a giant planet — orbiting Roque 12, a member of the young stellar cluster Pleiades. 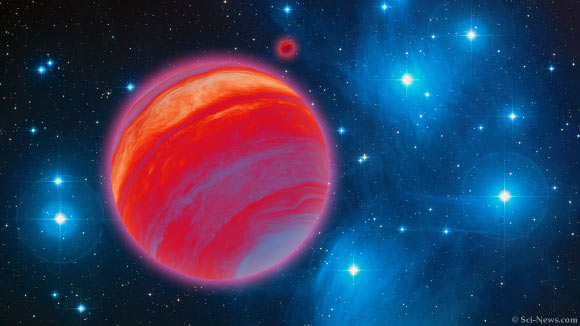 The Pleiades is an open star cluster about 440 light-years from Earth in the constellation of Taurus.

Also known as the Seven Sisters and Messier 45, it contains more than 800 stars and dozens of free-floating brown dwarfs with ages of about 120 million years.

The combination of its nearness and youth makes its rapidly cooling brown dwarfs bright and easy to detect.

The brown dwarf Roque 12 was first spotted by Dr. Leif Festin of Uppsala Astronomical Observatory in 1998.

Now University of St Andrews astronomer Aleks Scholz and colleagues report the discovery of a deep, singular eclipse in Roque 12.

The event was observed in 2002 with two telescopes at the German Spanish Astronomical Centre on Calar Alto, Almería province, Spain. It was 0.6 mag deep and lasted around 1.3 hours.

“The best explanation for the eclipse is the presence of a companion on an eccentric orbit,” the astronomers said.

They found that the substellar object orbits Roque 12 in less than 70 days.

It has most probably a mass between 10 and 42 Jupiter masses, and therefore could be either a giant planet or a brown dwarf.

“The Roque 12 system could be one of very few known eclipsing binaries in the brown dwarf domain, the first with high eccentricity and long period,” Dr. Scholz and co-authors said.

“A system like that would be uniquely suited to test evolutionary models for substellar objects.”

“We encourage the astronomical community to help hunting for the putative second eclipse of Roque 12.”

The team’s paper will be submitted for publication in the Open Journal of Astrophysics.