A research team led by University of Manchester astronomers has carried out a long-term monitoring campaign of a repeating fast radio burst called FRB 121102 with the 76-m Lovell Telescope and detected a period of 157 days with a duty cycle of 56%. 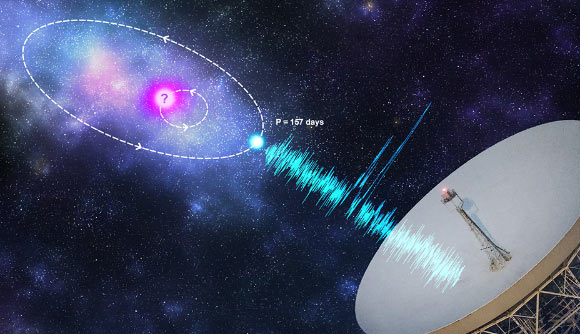 An artist’s impression of an orbital modulation model where the FRB progenitor (blue) is in an orbit with a companion astrophysical object (pink). Image credit: Kristi Mickaliger.

Fast radio bursts are enigmatic and rarely detected bursts of energy that come from far beyond the Milky Way Galaxy.

These events have durations of milliseconds and exhibit the characteristic dispersion sweep of radio pulsars. They emit as much energy in one millisecond as the Sun emits in 10,000 years, but the physical phenomenon that causes them is unknown.

To date, more than one hundred FRBs have been detected, yet only some of these have so far been observed to repeat.

In 2017, astronomers pinpointed the location of the FRB 121102 source and reported that it lies in a star-forming region of a dwarf galaxy more than 3 billion light years from Earth.

Now, University of Manchester’s Dr. Kaustubh Rajwade and colleagues have discovered that radio emission from FRB 121102 follows a cyclic pattern, with bursts observed in a window lasting 90 days followed by a silent period of 67 days.

“This is an exciting result as it is only the second system where we believe we see this modulation in burst activity,” Dr. Rajwade said.

“Detecting a periodicity provides an important constraint on the origin of the bursts and the activity cycles could argue against a precessing neutron star.”

“This exciting discovery highlights how little we know about the origin of FRBs,” said Dr. Duncan Lorimer, a researcher at West Virginia University.

“Further observations of a larger number of FRBs will be needed in order to obtain a clearer picture about these periodic sources and elucidate their origin.”

The results appear in the Monthly Notices of the Royal Astronomical Society.