Just as the phrase “It’s Britney, bitch” knocks you back at the onset of “Gimme More,” the pink exterior of Britney Spears: The Zone practically blinds you as you turn the corner on 3rd Street. The Zone, an interactive pop-up experience opening in Los Angeles this Friday (January 31), announces itself loudly, with a flowery, Pepto Bismol-pink mural featuring a lifelike recreation of Spears’s snake-assisted “I’m a Slave 4 U” strut and a portrait from her Piece of Me promo shoot. Even the parking lot lines have been repainted pink. In this house, it’s all Britney.

The Zone is situated inside an old Kmart and utilizes all 30,000 square feet to bring the living pop icon’s most beloved eras and music videos to life. When you walk through the doors, you’re smack-dab in the middle of a giant retail shop selling everything Britney: old tour tees, “Work Bitch” hats, pastel pink basketballs, Britney Funko dolls, and more. There are tall display cases with memorable Spears costumes, including the adorable dress she wore as an 11-year-old contestant on Star Search, the orange studded bodysuit from “Till The World Ends,” the blue flight attendant getup from “Toxic,” and her Pepsi race car uniform.

“Obviously we had Britney’s blessing, and she was so excited about it that she donated these to us,” Jeff Delson, lead producer for The Zone and CEO of Black Sky Creative, told MTV News about the costumes. “She wanted people to see them. And obviously show that she’s supporting it because she’s helping provide costumes and memorabilia throughout the space that fans can see.” The experience begins in earnest when you step into a classroom where vintage Britney Barbie dolls are displayed on the bookshelves and “Hit me baby one more time” is scrawled across the blackboard. There, visitors are greeted with a video message from Felicia Cullotta, Spears’s former assistant and righthand woman who made a cameo as the principal in “…Baby One More Time.” Seeing her is a total blast from the past, and one that diehard fans will appreciate — they’d recognize Fe’s face anywhere. 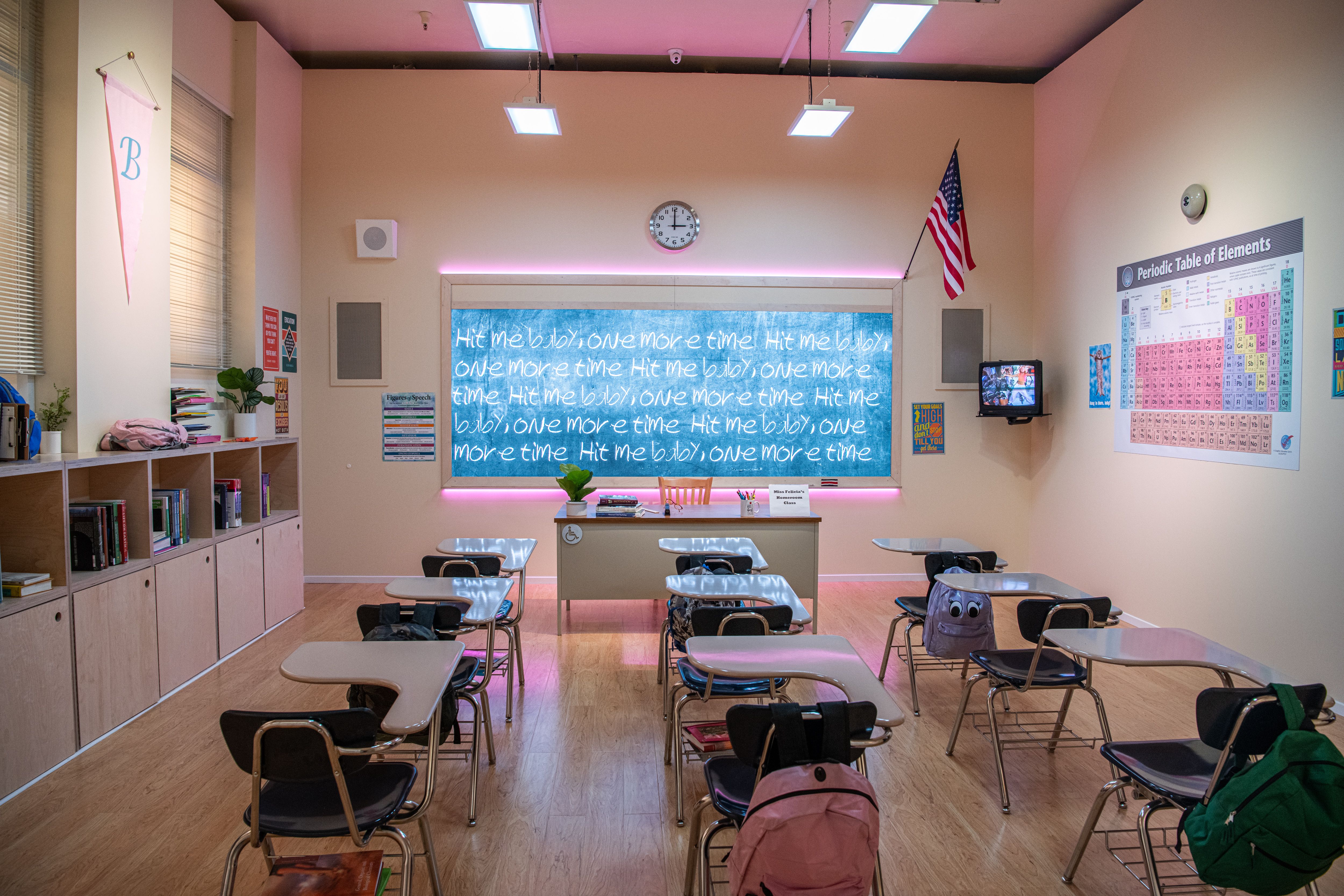 “We reached out to Felicia. She loves Britney so much, and she agreed to do it for us,” Delson said of her involvement. “She is the sweetest, funniest, cutest person and was so excited to do it for Britney’s fans and for Britney. All those little touches that really feel authentic are really important.”

From there, you wander a series of 10 rooms, including “Britney High,” a love letter to “…Baby One More Time,” where you can drop a note for Brit in her locker; a trip to Mars for “Oops!…I Did It Again,” which includes a life-size astronaut who’s ready to propose to you with the Heart of the Ocean necklace (“Aww, he shouldn’t have”); and a dark and stormy “Stronger” room featuring a sequence of infinity mirrors and metal chairs, where only the brave will attempt that strikingly complex chair choreo. A nifty installation in the “Me Against the Music” room fulfills your dream of letting you be the Madonna in a dance-off against Spears. “Toxic” takes you on a Brit-themed airplane, complete with a champagne cart, “Toxic”-emblazoned barf bags, and a pink telephone that, when answered, has Spears’s voice cooing “It’s Britney, bitch” in your ear before she abruptly hangs up. The “Piece Of Me” room lets you pose on a red carpet and take your own tabloid photo, which is gets splashed onto an Us Weekly-style magazine cover. All the while, guests swipe their RFID wristbands to take part in photo and video installations that they can download on the pop-up’s app. 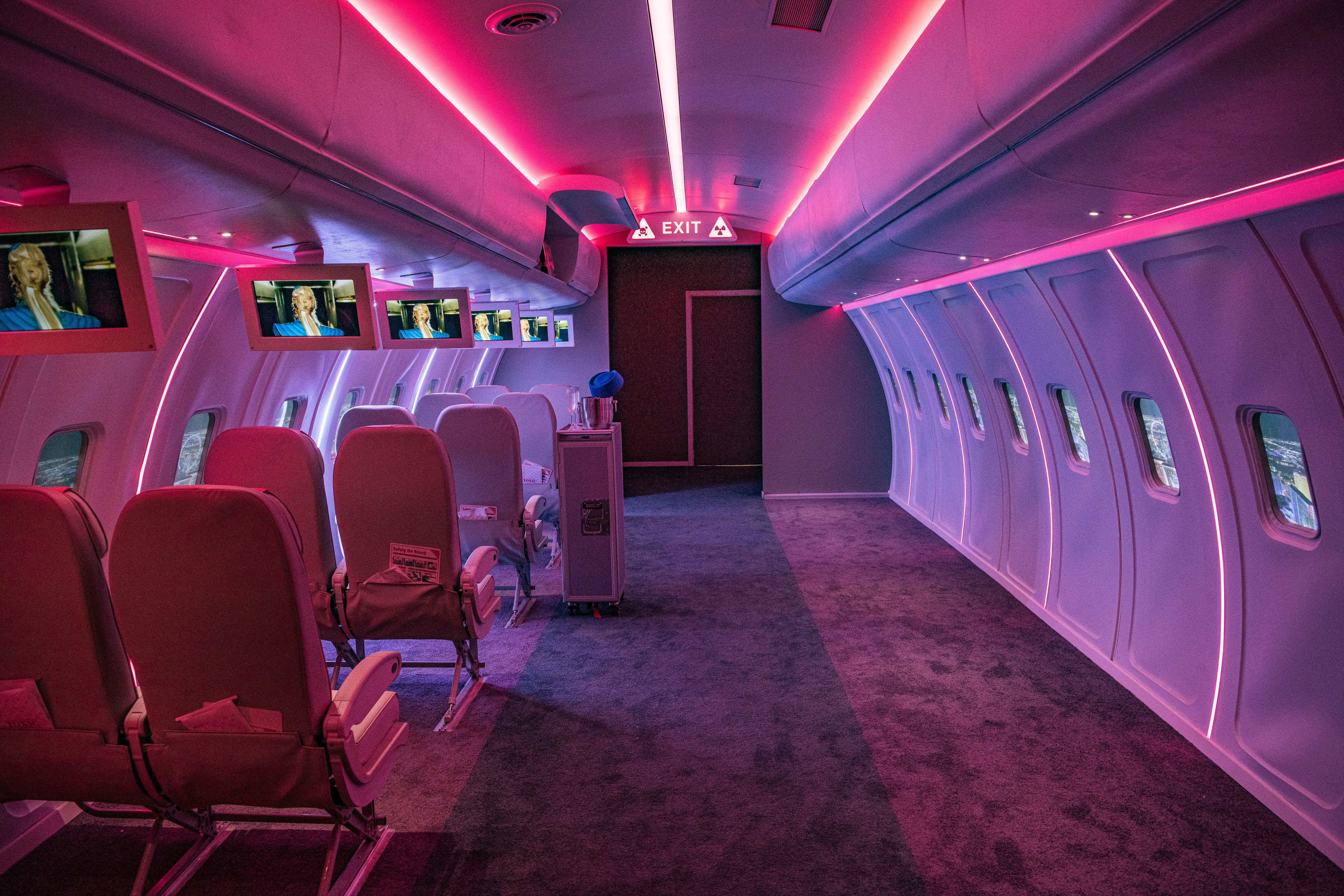 Each of the rooms is based on an iconic Spears music video, with two notable exceptions. The first is the jungle-themed “I’m A Slave 4 U” room, based on Spears’s throwback VMA performance, with footage from that iconic moment playing on a shimmering screen that looks like a waterfall. Fans can pose inside of a cage with a stuffed yellow python (hi, Banana!), and a giant snake with blinking eyes is coiled around the humid, misty space. In a true full-circle moment, a bunch of Spears’s former dancers and choreographers were invited to The Zone earlier this week, and they busted out the O.G. “Slave 4 U” moves, like it was 2001 all over again.

The other exception is the Blackout chapel, a candle-lit space dedicated to Spears’s 2007 cult album. As Blackout plays on loop, you can pray to Godney at a stained-glass altar that lights up when you kneel in front of it. Shockingly — or not, depending on how big of a Blackout stan you are — Delson says they’ve already gotten requests from fans who want to get married there.

“We’ve had multiple requests from fans for weddings, for birthday parties,” he said. “People just love it so much and they want time to explore the space in a special way and really feel like they’re in the world.” (For the record, if you want to do a whole In The Zone wedding experience, the “Circus” room — which houses a giant ball pit, carnival games, a Tarot card reader, and the bikes from the Circus tour — would be a bomb reception space.) The goal of The Zone, Delson said, is simply to honor Spears in fan-centric fashion. “For us, it’s about doing it right, being fans, and making sure you’re really capturing the details,” he said. “Her fans love her so much that they would know if the details weren’t right or things weren’t aligned. We spent a lot of time, two years, to make sure that everything’s perfect.

“We’re such huge fans of Britney, that when we wanted to create an experience where you can step into music videos of an artist, she was our first choice because these videos are so iconic and the ones that are so etched into our thoughts and memories,” Delson added. “When we went to her, we were excited that she wanted to do it.” 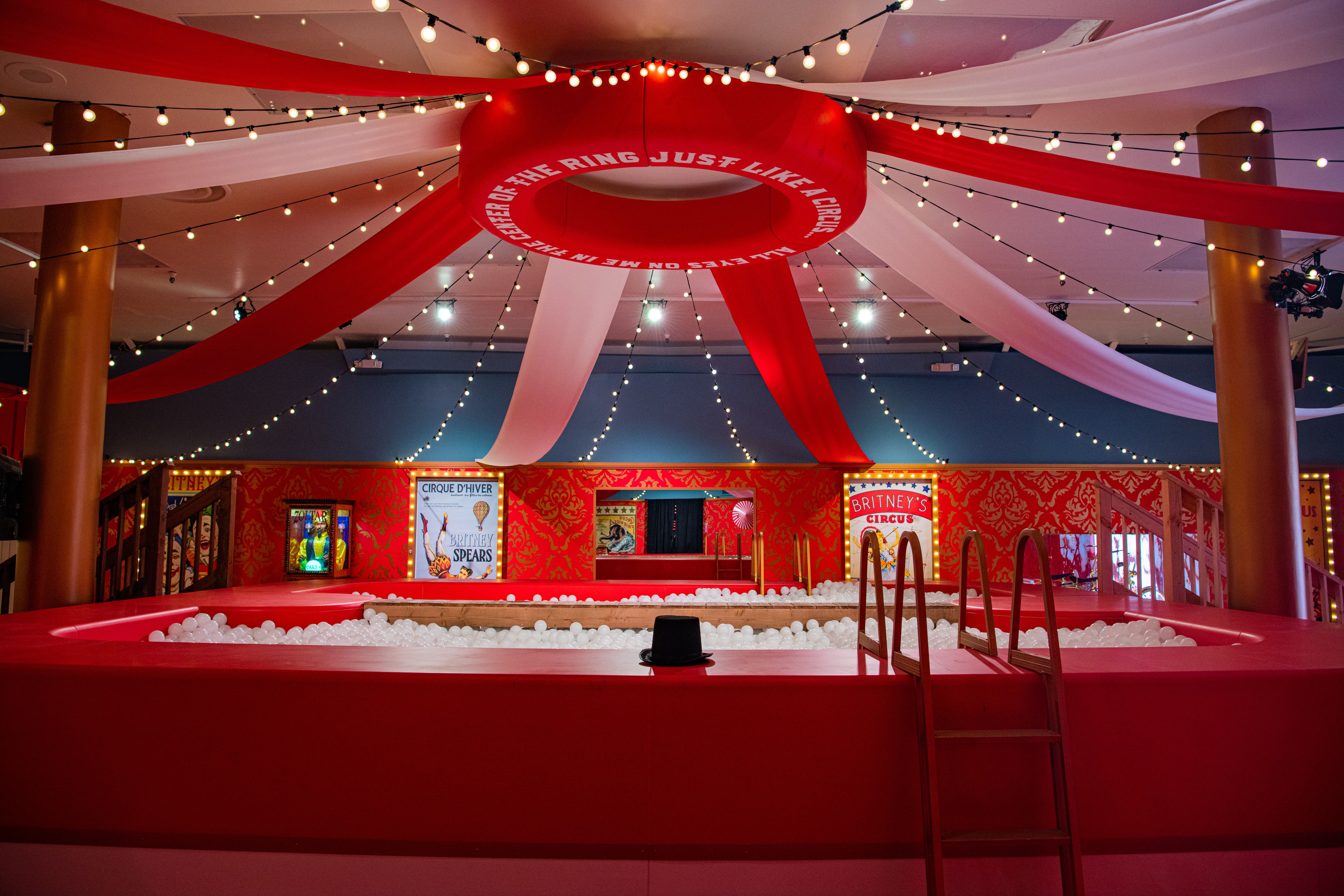 As Delson notes, Spears is certainly a trailblazer in pop music and in industry trends as a whole. She was the first young, current artist to bring her own residency show to Las Vegas — long before Gwen Stefani, Jonas Brothers, Lady Gaga, or Christina Aguilera did the same thing. Delson predicts this kind of interactive pop-up experience will similarly become a trend in the pop sphere, but it’s about picking the right artists and catering to the fans. “I think there will be a lot of people that will try to attempt to do this,” he said, “but she’s leading the charge.”

Certainly, being a Spears fan has had its ups and downs as of late — many supporters have been worried about the pop star’s wellbeing in the midst of the hearings about her conservatorship. Ultimately, though, The Zone is the kind of experience that reminds you how fun it is to love Britney’s music and how cool it feels to literally step inside the world of the videos we all know and love. Plus, fans will be relieved to know that The Zone is backed by Spears and that, according to Delson, she plans on visiting the pop-up in person. Because even she can’t resist a piece of it.